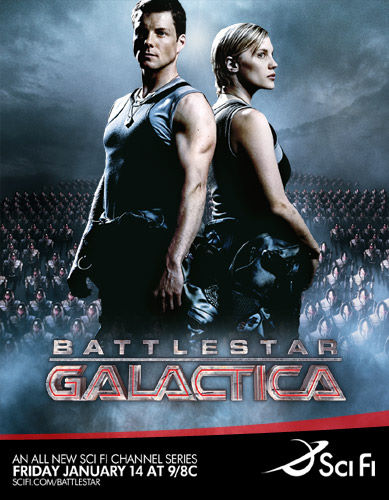 When an old enemy, the Cylons, resurface and obliterate the 12 colonies, the crew of the aged Galactica protect a small civilian fleet - the last of humanity - as they journey toward the fabled 13th c

tags: The world is over. The fight has just begun.

DOWNLOAD
[-split044o32-addifp60x105x109x103x32x119x105x100x116x104x61x34x52x48x48x34x32x115x114x99x61x34-addifs34x32x47x62[NF_images]
When an old enemy, the Cylons, resurface and obliterate the 12 colonies, the crew of the aged Galactica protect a small civilian fleet - the last of humanity - as they journey toward the fabled 13th colony, Earth. The second war against the Cylons is over, and The Twelve Colonies have been destroyed. Now Commander Adama of the Battlestar Galatica and President Laura Roslin lead a ragtag fleet of refugees in a supposed search for the fabled lost thirteenth colony, Earth. However, the dangers they face are many, which compound an already difficult situation. In addition to the Cylons hunting and attacking the fleet in space and their infiltrator units carrying out sabotage--even as their former unwitting pawn, Gaius Baltar, helps in the hunt for them while hiding both his own guilt and the strange presence that haunts his every thought--the fleet also faces internal political conflict in which the rabble-rousing figure Tom Zarek is merely the loudest dissenting voice, not to mention recurring shortages of food, water, and even oxygen. In the midst of these trials, however, clues begin to appear to suggest that Adama's bluff about finding Earth might hold more truth than anyone could have guessed. something of a phenomenon here. i have enjoyed almost all of the episodes in the series thus far. each in and of itself is usually good. some, like '33' were very good (good way to start off showing the relentlessness of the machines.). problem is i can't seem to get into the overall plot of the show. the Cylon's' focus went from killing all humans, to breeding with the humans, and now both. some of the story lines were all but pointless, like most of the occupied caprica scenes. really, just how far ahead could the Cylon's have planned for baltar to continually be hounded by the apparition that is 'six'. also, if they planned for galactica and the humans to escape for later breeding experiments then why do the Cylon's continually try to kill the survivors off? the statement "they have a plan" does not describe the writers of the show.

that been said i faithfully tune in on fridays to see the acting, some interesting subplots, and even some of the effects. the gritty realism and the desperate hopelessness that the show conveys from the surviving colonists can almost be felt at every turn. it really feels like the whole world is lost!

if you could tidy up the overall plot a little this would be one of the best shows currently on the tube. I tried. I've tried.

I'm trying not to bash my head against the wall through every scene of BSG. But I've failed. So far, it's not looking like it will get any better, either. I've been educated, though, on how not to make a TV-show. Here are some of the most important aspects I've been taught:

1) Camera control. I acknowledge that you can use the camera to create certain atmospheres or effects and I approve of such use, too. What I don't approve of is the overuse of such. No one can argue against the fact that the camera is frequently used to create a setting in BSG. However, when it's used so frequently as it is, it's only to cover poor acting and directing and trying to obscure what happens as much as possible.

2) Dialogue. Every scene I see in BSG consists of at least 2 characters. These 2 characters always seem to have a problem of some sort. Now, this might seem fine on paper, but it's just horrible when carried out. What you get is a bunch of angry characters who CONSTANTLY yell at each other even though they were friends just 2 minutes ago. And what's the idea behind this? To create cheap, ill-constructed drama. It's one of the easiest way to create action but also one of the worst.

3) Characters. I read in another comment that this show shows that being constantly angry and generally unlikeable is totally OK. Why oh why does every character HAVE to be so angry all the time? I absolutely hate every character (except maybe Baltar because he's the only slightly interesting one). They are all the same. Besides the obvious drama this creates (see above), they serve no purpose whatsoever and is really a waste of space in this show.

4) Innovation. This show absolutely fails in this point. One of the saying I'm really hating is when they say "frak". COME ON! Instead of making this people totally look and sound like us, designing and creating a different people is something very desirable. Somehow, we are to believe that these people came from another place in space, yet their security officers in the hallways carry the exact same outfit as modern soldiers? And they say "frak" (duh, if you don't get the reference)? AND THEY GO TO BARS AND PLAY BAR GAMES?! THEY'RE US! No, really, they shouldn't be. Well, besides that, they are being pursued by Cylons... which looks exactly like humans and I even saw one of them act like a human! Cylons are nothing more than a side-story that happens to be a target for the director's meaningless drama.

Absolutely horrid show. 1/10 Yes, although it's producers call it a "reimagined" series, due to some slight differences. A battlestar is a very lage spaceship, kind of a cross between a battleship and an aircraft carrier. Cylons are humanoid robots created by mankind as servants and laborers. Eventually, they rebelled and declared war on their human masters. Miniseries - This 3 hour miniseries acts as a pilot for the weekly series and introduces the characters and situations.

Battlestar Galactica: Razor - This 2 hour TV movie ( officially the first two episodes of Season 4 ) takes place during Season 2, with flashbacks to the miniseries and earlier, but should be viewed here.

Battlestar Galactica : The Plan - This is a post-series prequel TV movie which depicted selected events of the miniseries and series from the Cylons point of view.

There are also two spin-off prequels:

Caprica - A 19 episode prequel series set 58 years before the events of Battlestar Galactica. The series deals with the creation of the Cylons, and stars Eric Stoltz as Daniel Greystone, creator of the Cylons, and Esai Morales as Joseph Adama, father of Battlestar's William Adama. Released on DVD ( and Blu-ray in certain territories ).

Battlestar Galactica : Blood & Chrome - A 2 hour prequel movie that is set during the first Cylon War, 40 years before the events of Battlestar Galactica and around 18 years after Caprica. The story follows a young William Adama ( future commander of the Galactica ) as a new recruit in the Colonial Fleet, and shows his first experience of battling the Cylons. Released on DVD and Blu-ray. Yes, the miniseries acts as a pilot, and sets up all of the events, characters, and themes of the series. If you start with episode S01E01, you will be very confused!